The Huawei Band 6 now has a successor in Huawei Band 7. The Band 7 was released in May 2022 and it comes in a slimmer case with the ability to reply to messages. One thing that really caught my attention is that the Band 7 still doesn’t have an inbuilt GPS which is a very big turnoff for me. Nevertheless, it’s good to see that the Huawei Band 7 has the ability to reply to messages with preset quick replies as well as features an always-on display mode. Beyond these few additions, nothing much has changed. In this post, we’ll be discussing the difference between Huawei Band 6 and 7 to help you decide if it’s worth upgrading.

In a nutshell, the Huawei Band 7 looks exactly like the Huawei Band 6. However, it’s slimmer and weighs a little less than its predecessor. It also now has an always-on display and can reply to messages with preset replies. Beyond these few additions, both Band 6 and 7 will track the same activities and have the same battery life of 14 days. 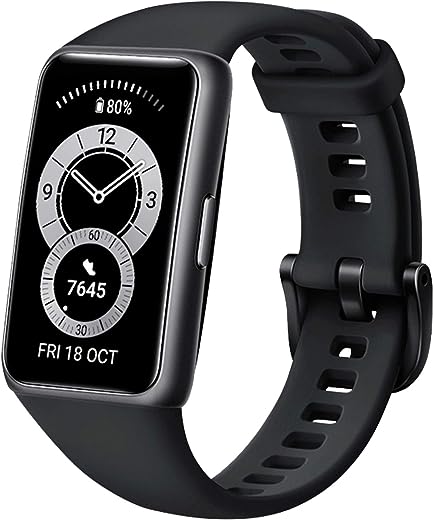 Regarding the design, nothing much has changed. The Huawei Band 7 looks very similar to the Band 6 expect for slight improvements.

First, both smartbands have cases made of the same durable polymer which I can confirm is very durable after using the Band 6 for almost a year.

The Band 7 also comes with silicone straps just like the Band 6. And the straps are interchangeable (another reason I liked the Band 6)

Furthermore, the Huawei Band 7 is rated 5ATM just like Huawei Band 6. This means that it can survive submersion in water up to 50 meters. As such, you can wear the Band 6 or 7 to the pool, shower or otherwise.

In all, both the Band 6 and 7 are well designed to maximize comfort. Although, the Huawei Band 7 is more comfortable to wear than its predecessor.

In the display section, the Huawei Band 7 retains the same display size as its predecessor. It has a 1.47 inches display size powered by AMOLED technology.

Both smartbands have the same resolution of 194 x 368 pixels and 283 PPI. So you shouldn’t expect any difference in the color depth.

From my experience using the Huawei Band 6, the display is quite colorful and can easily be read even under direct sunlight.

You also get loads of watch faces to choose from in the Huawei Health app. Although, there is now the availability of always-on display watch faces on the Huawei Band 7.

Meanwhile, the Huawei Band 6 lacks an always-on display. You only have the option of keeping the screen awake for up to 20 seconds.

Both Band 6 and its successor have a touch-sensitive screen with a single button by the side for effortless navigation.

Again, nothing much has changed in the fitness tracking department. Although, the sleep and outdoor tracking inconsistency I experienced with Band 6 has been resolved with the Band 7.

The Huawei Band 7 just like the Band 6 comes equipped with an accelerometer, gyroscope, and heart rate sensor. Both smartbands will track your steps, calories, sleep, heart rate, stress and blood oxygen.

Unfortunately, the Huawei Band 7 still doesn’t have an inbuilt GPS. It however supports connected GPS with your phone just like Huawei Band 6.

From my experience with Huawei Band 6, the connected GPS was purely awkward. It never tracked my route correctly. Even worse, is that you must start an outdoor workout from the Huawei Health app to track routes, yet it was very inconsistent.

This anomaly has now been corrected with the Band 7 which is one of the main reasons I will encourage upgrading. It did map my routes correctly when compared to the Galaxy Watch 4 Classic and Apple Watch Series 7.

It’s interesting to note that the Band 7 comes with 96 preloaded sports modes just like the Band 6.

When I compared the Huawei Band 6 against Galaxy Fit 2, I rated the latter higher simply because it allows you to reply to messages using the preset quick reply function.

Just like the Huawei Band 6, the Chinese version of the Huawei Band 7 comes with an NFC chip that supports Alipay. This allows for a non-contactless payment directly on the device.

With the Huawei Band 6 I got about 2 weeks of battery life on mixed usage. It’s one of the interesting features of the Band 6, and it’s good to note that the Band 7 also has the same battery life.

There is no significant difference in price between Band 6 and 7. The new Band 7 despite having a slimmer design, always-on display and ability to reply to messages, is priced at about $50 for the standard edition, while the NFC version is priced at $60. This is almost the same price as the Band 6 which costs about $45 on average.

The only difference between the Huawei Band 6 and 7 is that the latter has a slimmer design, features an always-on display and can reply to messages.